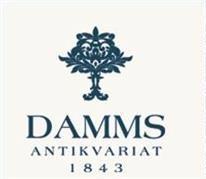 Damms Antikvariat has been dealing with books, maps and prints for nearly 170 years

December 4th, 1843 Niels Wilhelm Damm published his first sales advertisement. That same year he had settled down as a bookbinder and a bookseller in one of Christiania´s suburbs back then,Grønland. He worked as a bookbinder, and he sold new and old books. In 1846 he became a citizen of Christiania and moved to Øvre Slottsgate 6, where his bookshop and antiquesary were localized for 110 years.

After a good 150 years in Dam-Gaarden and Tollbodgaten, Damms Antikvariat moved to new premises at Christiania Torv at the top of Rådhusgaten, and is today located at the area of Frogner in Oslo.

Damms Antikvariat was for many years linked to Claes Nyegaard (1920-1999), who through his personality and great knowledge was seen as an institution far beyond the Norwegian borders.